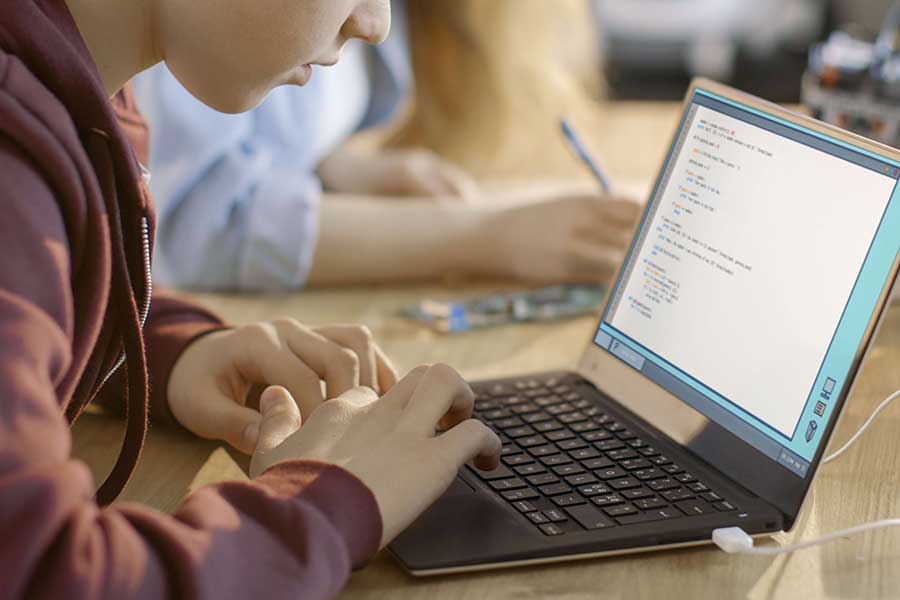 You might have seen or heard that more and more kids are enrolling in specific courses to learn the basics of coding. Why should your child learn to code in the first place? Well, Internet growth statistics show us that from December 1995 to June 2020, the number of users has dramatically grown from 16 million to 4648 million. This means that now almost 60% of the world’s population has access to the Internet. With about 2 billion websites, of which 400 million are active, you can do almost anything from establishing your business to buying groceries using the Web. Bill Clinton, the 42nd president of the United States, says, “When I took office, only high energy physicists had ever heard of what is called the World Wide Web… Now even my cat has its own page.”

As you can see, things have hugely changed in recent years, and the former president’s word is an absolute indication. It is obviously necessary for children to be adapted to the pace of today’s world. Trying to prepare your child for the future is clearly every parent’s ultimate goal. You make every effort to be the best version of yourself and arrange things to go smoothly. Right? So, why programming? Why does learning to code matter?

Programming is the New Literacy

Why is coding for kids essential? Literacy has been a common goal for centuries, with attentive parents and educators dedicating their life to ensure that the children under their supervision obtain the skills necessary to succeed in their lives and future careers. One could say that until four decades ago, literacy meant becoming proficient in the traditional three “R’s” of “reading, ‘riting, and ‘rithmetic” (regardless of spelling).

As home computers became mainstream in the 1980s and technology started becoming a part of our everyday life, more and more the importance of taking advantage of computers and other tech devices arose. Computers emerged in educational settings, and tech literacy became regarded as the fourth literacy. It’s not unusual today to come across children who can code and know how to program a computer. Students all around the world are learning to code, and prominent figures are emphasizing on the reasons why programming matters.

Learning to code not only is the fourth literacy that makes children educated; it’s an ability that makes kids highly marketable for the future. You may argue that tech literacy doesn’t necessarily mean knowing how to program, and children having general tech skills like word processing and creating slides can fend for themselves. Let’s be clear!

Having that said, the reasons behind why coding for kids is necessary should be given second thoughts. We also need to mention that some experts claim that Learning to code should be treated like learning a second language (the language of the 21st century!). We know for sure that the best age to start learning a new language is childhood. Not to mention that learning to code is an ongoing process that demands time, money, and energy. On the bright side, there are some coding courses for kids that are designed specifically to meet their needs and level, which makes this process fun, tangible, and considerably easy.

Everyone agrees that education must prepare children for the future. In this regard, there is nothing more important than learning skill sets that help them excel in their life. Soft skills, key competencies, core skills, or anything you call them are a combination of different abilities that help us interact with other people effectively. Needless to say that they are to be practiced from early childhood. What other way is more interesting than learning these skill sets through learning to code? Find Soft skills that children acquire through coding.

Learning to Code is fun

It is now clear why learning to code is essential for kids but isn’t it supposed to be cold and boring? Not at all!

With Scratch, Minecraft, Roblox, and many other coding platforms designed for children, programming has been never more interesting! In fact, from 2013, Scratch is being used in schools to introduce basic programming concepts to children. If your children’s school doesn’t offer coding courses, you can enroll your child in our online guided courses based on their age group.

Better to direct your children’s talent into something instructive and valuable, which is fun too, rather than letting them use their screen time for playing video games that lead to nowhere.

One of the biggest challenges in learning to code is fear. Online coding courses compared to traditional classes, provide a better environment that makes this feeling disappear. They enable children to learn at their own pace while they have the opportunity to benefit from our instructors’ guidance. For more details, you can check our packages. It is a pity to deprive our children of something valuable that can change their future for good. It doesn’t matter if their career choice is something different. Coding is a necessary skill for anyone who wants to survive in this insanely competitive world. If you have prior experience with any coding courses, feel free to leave a comment below.

Tag:why coding for kids, why programming