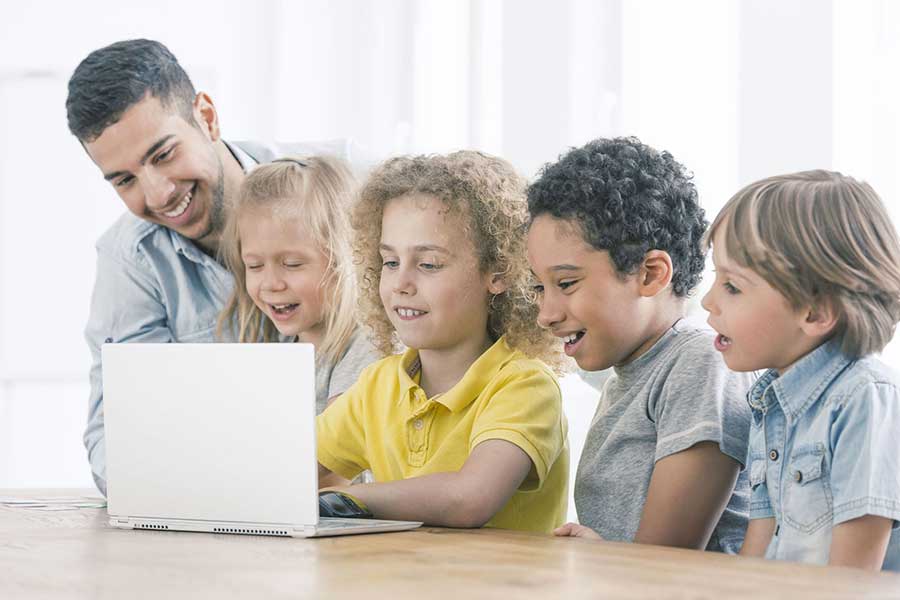 What are your options in a nutshell?

Generally speaking, there are two different kinds of coding for kids languages; block-based and text-based. Some people believe that block-based coding is more suitable for the youngest of learners while a more complicated language can be used for older students. However, we think this is not necessarily the case. We can always find children like Mohammad Hamza Shahzad, a British-born Pakistani who is the world’s youngest programmer if we recognize their talent at a young age. Conversely, some older kids need to begin with a visual programming language if they want to learn coding without facing frustration. To sum up, If you want to follow the age-group approach it is better to begin programming for kids with blocked-based languages and then move on to more serious text-based ones.

Coding Languages for young Kids: Where should I begin? Start with Scratch and other visual programming languages that are based on Java. Find your Scratch course here.

Coding for kids with zero experience begins with Scratch, a block-based visual programming language that delivers coding lessons for preschoolers in a fun game-like environment. Having been translated into more than 70 languages, Scratch is the most popular programming language for kids all around the world.

Best for: Engaging children in coding

What can children do with Scratch?

Blockly, another JavaScript-based programming language for kids is considered as Google’s response to Scratch. The truth is that Blockly is a client-side library that enables you to add visual code editors to mobile and web apps and therefore it is not specifically designed for kids.

In other words, with using Blockly you can enhance mobile apps according to your needs, debug them or add a new feature, but since it has a graphical user interface (GUI) that enables users to drag and drop blocks and write codes fast, it naturally becomes a suitable language for kids to learn coding.

It can be run on all major browsers and is highly extensible (designed to accommodate changes). Another strength point is that Blockly’s visual blocks can translate directly into other languages like Python, JavaScript, Lua, and PHP which makes it really easy to write the code.

Best for: Engaging children, teenagers and even adults in coding

What can children do with Blockly?

Alice, like Scratch and Blockly, is a drag and drop coding language which takes its name from the famous book Alice’s Adventures in Wonderland. According to Randy Pausch the lead researcher of Carnegie Mellon University where the software is developed, Alice’s mission is to “communicate clearly and in an interesting way.” This programming language for kids makes the transition to text-based languages easier.

Best for: Engaging children in coding, The second step after Scratch

What can children do with Alice?

From the game to its Education Edition, Minecraft has a lot to offer to children who want to learn coding. This block-based programming language for kids enables them to learn the fundamentals of coding in a fun game-like environment. Children use different “Mods” to manipulate the game by creating monsters or giving players items that are not available for everyone. Learning how to enhance the game is a stepping stone to learn other languages like Java which minecraft is based upon. Since they do not need to deal with typing at the beginning it makes children more comfortable to write their own strings of codes as they go further in the game.

Best for: Engaging children in coding, The second step after Scratch

What can children learn with Minecraft?

What is the next step?

Children love playing on Minecraft which is actually written in Java. So, they can continue to learn coding with Java which is a more serious language than the previously mentioned ones. The rest of the languages named here are all text-based. It means that these are deeper approaches of coding for kids but they can still be fun! There are many online courses for children to learn each of them at home including the ones on our website:

Read the advantages of online courses if you want to know more.

Java has been around for almost two decades. It is interesting to know that Twitter, Gmail, Youtube, Amazon and Minecraft all use Java. A great inspiration for learning this programming language for kids is that it enables them to build their own “mods” in Minecraft, but what makes Java really popular is its ability to be run on a variety of platforms, being easy for writing code and maintaining it, and having plenty of resources to learn it.

Best for: Minecraft Fans/ Students who want to become a developer

What can children do with Java?

An excellent scripting language for kids who want to learn text-based coding and a must for those who want to learn a more complicated language than PHP for web designing.  best for the children who have some experience with scratch.

Is Javascript similar to Java? “Java is to JavaScript what car is to carpet”, says Chris Heilmann, a German Developer Evangelist. They are very different languages in terms of their abilities and uses and not to mention that Javascript is easier to learn.

What can children do with Javascript?

Perhaps we can name Python the most popular serious programming language for kids, actually not only for them, but also for anyone who wants to learn coding in an easy way. Having a simple syntax similar to English language, amazing library (to use pre-written code and other kinds of data), being easy to read and write, reliability, and accessibility are the factors that make Python one of the best options when it comes to learning coding for kids.

Best for: Flexibility, Those who want to become programmers

What can children do with Python?

Why is easy syntax so important?

If you need for example 5 or 6 lines to write “Hello World!” in Java, in Ruby and Python you need only 1 line. These are simple languages stressing human needs over computer needs.

Ruby, another general-purpose programming language for kids, benefits from an easy syntax like Python does. This is what makes it ideal for beginners including kids. In comparison to Python, Ruby is slower but has more solutions to one answer and is more popular with start-ups.

What can children do with Ruby? Everything that they can do with Python.

If you are looking for another text-based  programming language for kids which has a simple syntax like Ruby and Python, Lua is your answer. It is even faster than Python, easier to learn, and needless to say that Lua-scripted games (Roblox for example) are far more popular, partially for the language’s simplicity. All in all, it is a great option as a scripting language.

What can children do with Lua?

There are several books for teaching kids coding in C++, one of  the most efficient languages to this date. We can consider it as a programming language for kids that helps them learn other languages easier. In other words, C++ helps children develop a better understanding of coding and makes other languages more transferable.

Best for: Who wants to become a programmer, deeper understanding

What can children do with C++?

There are a variety of other programming languages for kids that could be found out there. The most important thing is to engage children in learning to code in a fun way to engage them and discover their talent as soon as possible. Embassy.education offers these courses to make this process easier. Please don’t hesitate to share your opinion with us!