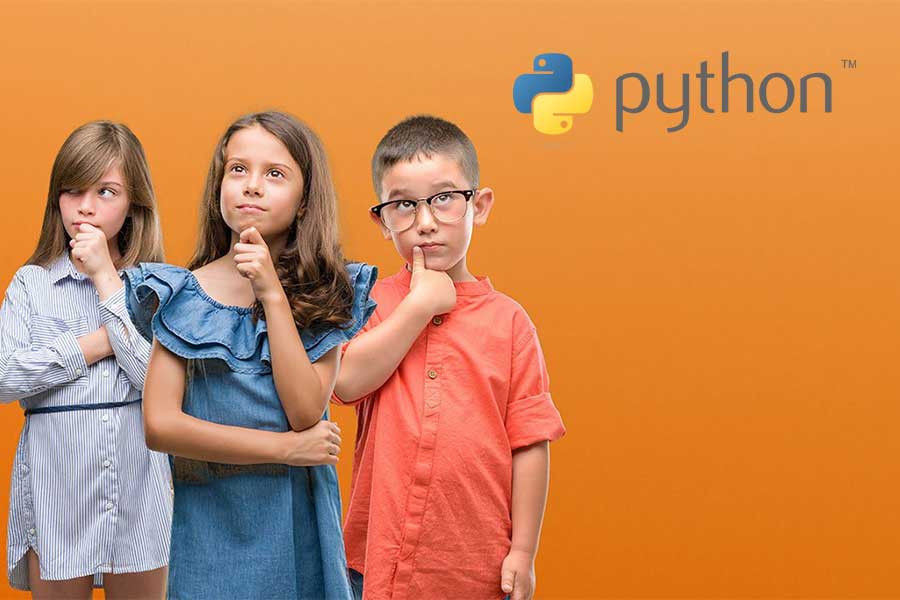 Before explaining why Python is the best, we need to make sure we’re on the same page. Programming in Python is best suited for kids who have prior knowledge of coding. To get this experience, we suggest starting a coding platform or language based on your kids’ age. If your kid is between 5-8 years old, ScratchJr might be the best option. For kids above 7, we suggest taking a Scratch course or a Minecraft course. These block-based coding languages teach programming fundamentals to kids in a fun way that makes them ready to learn a text-based language when they reach a certain age/level of experience. They can continue their coding journey with Roblox and Python for kids after that.

But if your kid is at least 9 years old, has prior experience with coding platforms, and is ready for something more complicated, Python is the best option! By 9 years old, we don’t mean that there is a right or wrong age to start Python for kids. As soon as your child understands elementary English, can read, write, and type on a keyboard they’re ready to start a text-based language like Python.

Kids can be overwhelmed by coding lessons if they’re not delivered in easy, broken-down steps. In fact, the most difficult part of programming is understanding its concepts. After this part, programming in text-based languages becomes fun and engaging.

Python’s competitors like C and C++ have complicated syntax. By this, we mean that their syntax is easier for computers to understand. On the other hand, Python is similar to English which makes it more readable for humans. So, as soon as your kid can read and write elementary English, and handle typing on a keyboard, they can code in Python.

Mathematics may be the least favorite subject of a lot of students. Had you ever, as a high school student, thought why on earth should you bother yourself with mathematics beyond basic arithmetics? This is perhaps because we’ve rarely seen the real-world application of math.

Learning to code helps kids identify how math works in everyday life. Children get to actually use math to solve problems instead of learning concepts. You may ask, what does it have to do with Python for kids? Can’t kids use any other language? Well, they can but Python is the easiest one, remember? This is another reason why Python is the best programming language to teach kids; its ability to make math more tangible.

3. Python is the most dynamic and versatile language

To have a grasp of Python programming language versatility you may want to know that numerous companies including tech giants like Google and Instagram all use it in their platforms. You can do almost everything with Python. For example:

Python programs and applications run on almost every operating system; Windows, Mac, Linux, Ubuntu, Android, ios, and any computer device from giant servers to tiny computers like the Raspberry Pi.

5. Children can see the results of programming in Python almost instantly

Python is way faster than other programming languages in terms of the time taken for development. This is because a piece of code in Python is 4 to 5 times shorter than the same code in Java. Besides, because of its easier syntax kids can build their own applications and projects soon after enrolling in a course. Let’s look at our online Python for kids program:

After just three lessons: Kids get familiarized with concepts like loop, numeric/string variables, and can rotate and reshape the turtle module to draw shapes.

six lessons: They can draw a snowman.

twelve lessons: They can build a simple calculator. It includes a birthday countdown or any countdown timer.

Building digital photo frames, interactive stories, emojis, ASCII art, dictionaries, and a bunch of other things are what kids are going to learn in just 35 lessons.

Check out our Python for kids course to find out about our different packages (homework-guided, private tuition,…). We offer the first three lessons free of charge for our basic package. Your kids can also participate in our online coding camps before registering for a course.

6. Python for kids makes switching to other languages easy

To be honest, this is a general rule of the learning process. When your kids learn A, it’s naturally easier for them to learn B as long as A and B are in the same category. The same principle goes for learning Python programming language, for kids. So, learning Python makes switching to other dynamically-typed languages like Ruby, Perl, Javascript, PHP, etc… easier for them. We recommend taking this step once they’re comfortable with Python. 14 is a great age to start building a solid foundation of coding for children who want to become developers.

7. The Python community is strong and supportive

Python was created in 1991 as an open-source language which means its source code is available, free, and modifiable to the public. Thirty years is a lot of time to build a strong community to support developers and learners from any background, skill, and age group.

Through these years, Python’s community has made a massive resource of video tutorials, books, and other references to go to when learners face a challenge. The same thing goes for its libraries and packages. Python libraries contain reusable chunks of codes that developers can use in their programs and save the hassle of writing the code from the beginning.

But how can this community make Python for kids easier? Well, they can use Python libraries for kids: Turtle, Tkinter, Pygame, Nltk, Numpy, and Pytorch are some of them. For example, the Turtle module which is used by the embassy.education lets kids draw shapes and pictures through coding. Children can even build games like hangman, tic-tac-toe, or their own games with the help of Pygame. Almost everything they need is already there.

8. The best fit for machine learning and AI-based projects

Machine learning programs help computers to “think” and “decide” like humans, based on algorithms. It’s basically having a computer to get a task done without explicitly programming it to do so. A real-life example of machine learning is speech recognition that changes spoken words into text.

With the help of machine learning, we learn from data and predict the future. Python with NumPy, Scipy, Pytorch, Scikit-learn makes machine learning possible for children. If programming drones and robots are your kid’s thing, this is another reason to use Python programming language for kids.

Web development, data science, machine learning, and automation are the areas that are now and will continue to be in-demand in the economy. These are the areas in which Python has been extremely popular in recent years. In fact, Python has managed to exceed other programming languages in terms of popularity because of its features.

For most parents, it makes sense to teach children skills that broaden their future job prospects. Python courses for kids is one of them.

Python is loved by developers. The number of its users is growing rapidly every year. In fact, it has won the TIOBE programming language of the year award four times (including 2020)—which is given to the language that has the most popularity. As a multi-purpose language chosen by Tech giants like Google, Facebook, and Reddit, it doesn’t seem that Python is going anywhere.

Python for kids is becoming more and more popular among teachers and parents as it transfers skills that children need in the 21st century. If the whole idea of coding for kids is new for you, please read Coding for Kids: Where to Start? Don’t forget to check our coding courses and please don’t hesitate to drop us a line in case you have any questions.

120 Holiday and After-school Activities for Your Kids